A general procedure to design objects that are intrinsically invisible (without the necessity of an external cloak) has not been demonstrated so far. Here we propose a flexible method to design such self-cloaked objects by uncoupling the scattered waves from the incident radiation via judiciously manipulating the scattering potential of the object. We show that such a procedure is able to yield optical invisibility for any arbitrarily shaped object within any specified frequency bandwidth by simply employing isotropic nonmagnetic dielectric materials, without the usage of loss or gain material. The validity of the design principle has been verified by direct experimental observations of the spatial electric field profiles and scattering patterns at the microwave regime. Our self-cloaking strategy may have profound implications especially in noninvasive probing, cloaked sensor applications, and scattering-free non-Hermitian optics based systems. 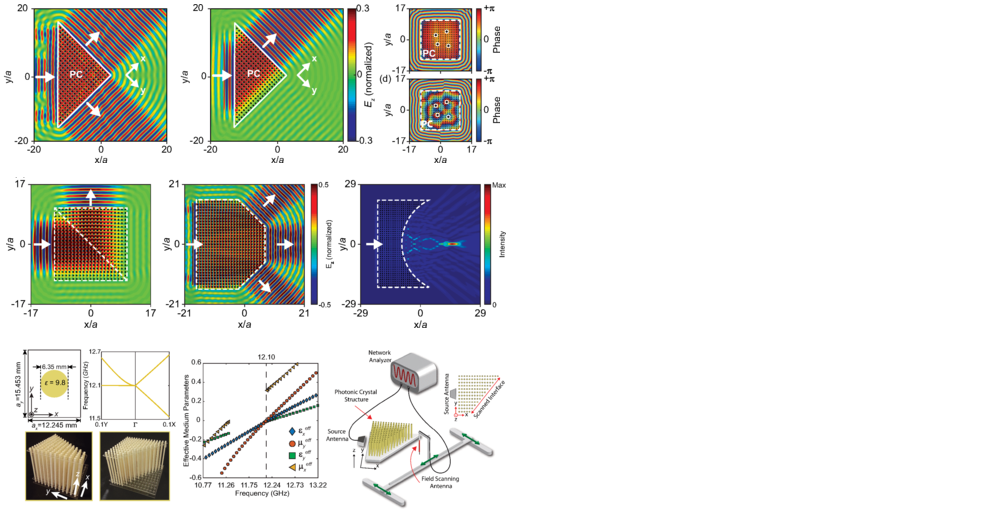 In this study, realization and applications of anisotropic zero-refractive-index materials are proposed by exposing the unit cells of photonic crystals that exhibit Dirac-like cone dispersion to rotational symmetry reduction. Accidental degeneracy of two Bloch modes in the Brillouin zone center of two-dimensional C2-symmetric photonic crystals gives rise to the semi-Dirac cone dispersion. The proposed C2-symmetric photonic crystals behave as epsilon-and-mu-near-zero materials (εeff ≈ 0, μeff ≈ 0) along one propagation direction, but behave as epsilon-near-zero material (εeff ≈ 0, μeff = 0) for the perpendicular direction at semi-Dirac frequency. By extracting the effective medium parameters of the proposed C4- and C2-symmetric periodic media that exhibit Dirac-like and semi-Dirac cone dispersions, intrinsic differences between isotropic and anisotropic materials are investigated. Furthermore, advantages of utilizing semi-Dirac cone materials instead of Dirac-like cone materials in photonic applications are demonstrated in both frequency and time domains. By using anisotropic transmission behavior of the semi-Dirac materials, photonic application concepts such as beam deflectors, beam splitters, and light focusing are proposed. Furthermore, to the best of our knowledge, semi-Dirac cone dispersion is also experimentally demonstrated for the first time by including negative, zero, and positive refraction states of the
given material. 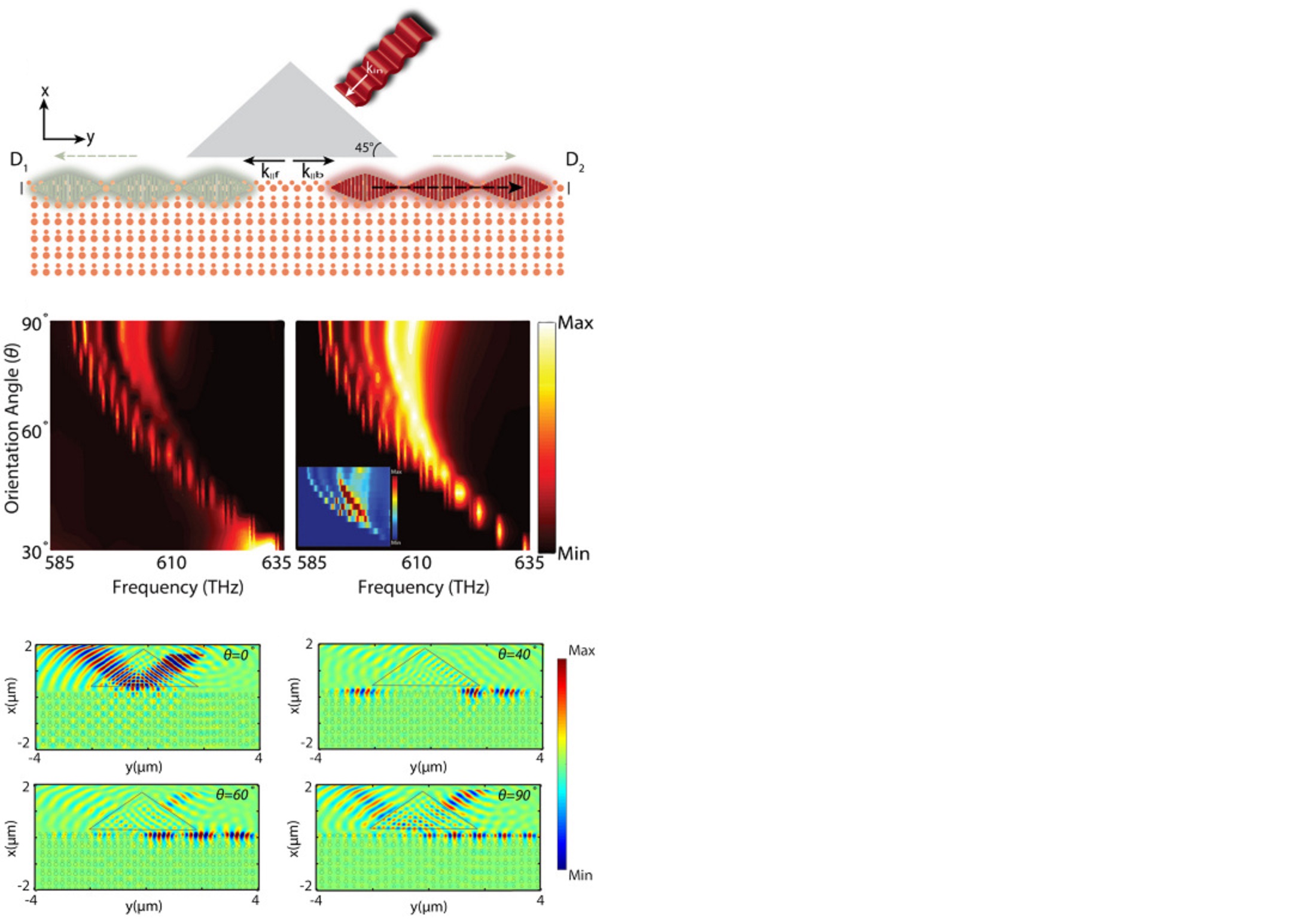 We propose and demonstrate reduced symmetry photonic surfaces providing highly controlled Bloch wave propagation. The backward and dual directional propagations have been observed in the proposed low-symmetric periodic structures without variation in the unit-cell filling factor. Frequency-domain analyses present group indices up to negative/positive −237∕ + 96 as strong indicators of the observed directional controlled surface waves driven by the orientation angle in the range of 20°–90°. Further verification of the index-based propagation direction has been achieved through detailed time-domain analyses and microwave experiments. Smart management of the propagation direction in low-symmetric surfaces has great potential for next-generation photonic applications. 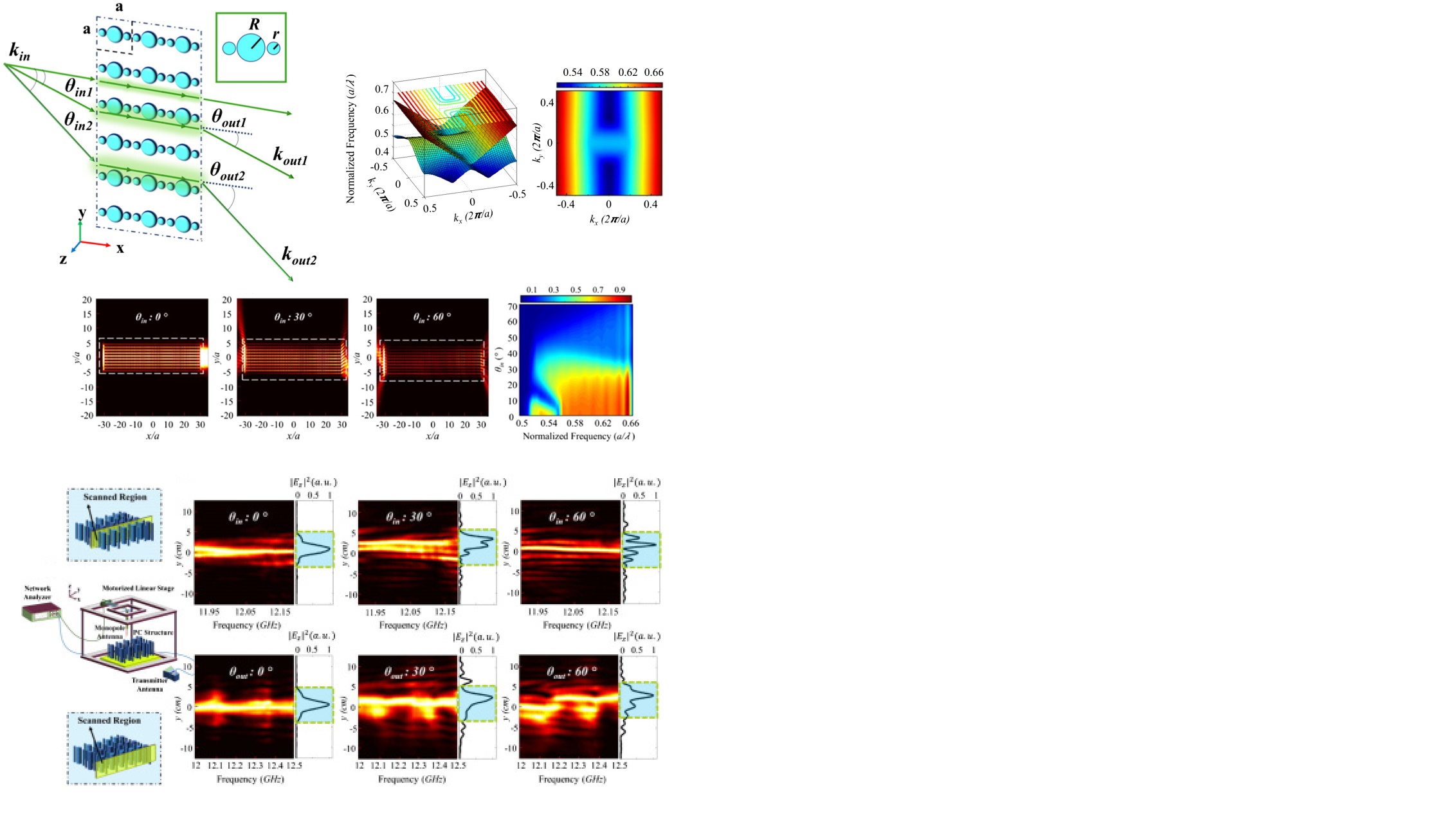 In this study, we report a low-symmetric photonic crystal (PhC) structure that exhibits high coupling efficiency in a broadband frequency range with a tilted self-collimating capability. First, the analytical approach is implemented as a starting point, and the ideal configuration is chosen for the self-collimation effect, which is analytically supported by group velocity dispersion and third-order-dispersion calculations. Then, numerical analyses in both time and frequency domains are performed to the ideal PhC design, which possesses a strong self-collimating characteristic, even at huge incident angles within the operating frequencies. Later, experimental measurements are conducted in microwaves, and the existing self-collimation property is still preserved at longer wavelengths in the millimeter scale. The microwave experiment as well as numerical analyses indicate that the designed PhC self-collimator allows overcoming possible misalignment problems at the PhC–source interface and enables a strong broadband beam channeling with a high transmission. 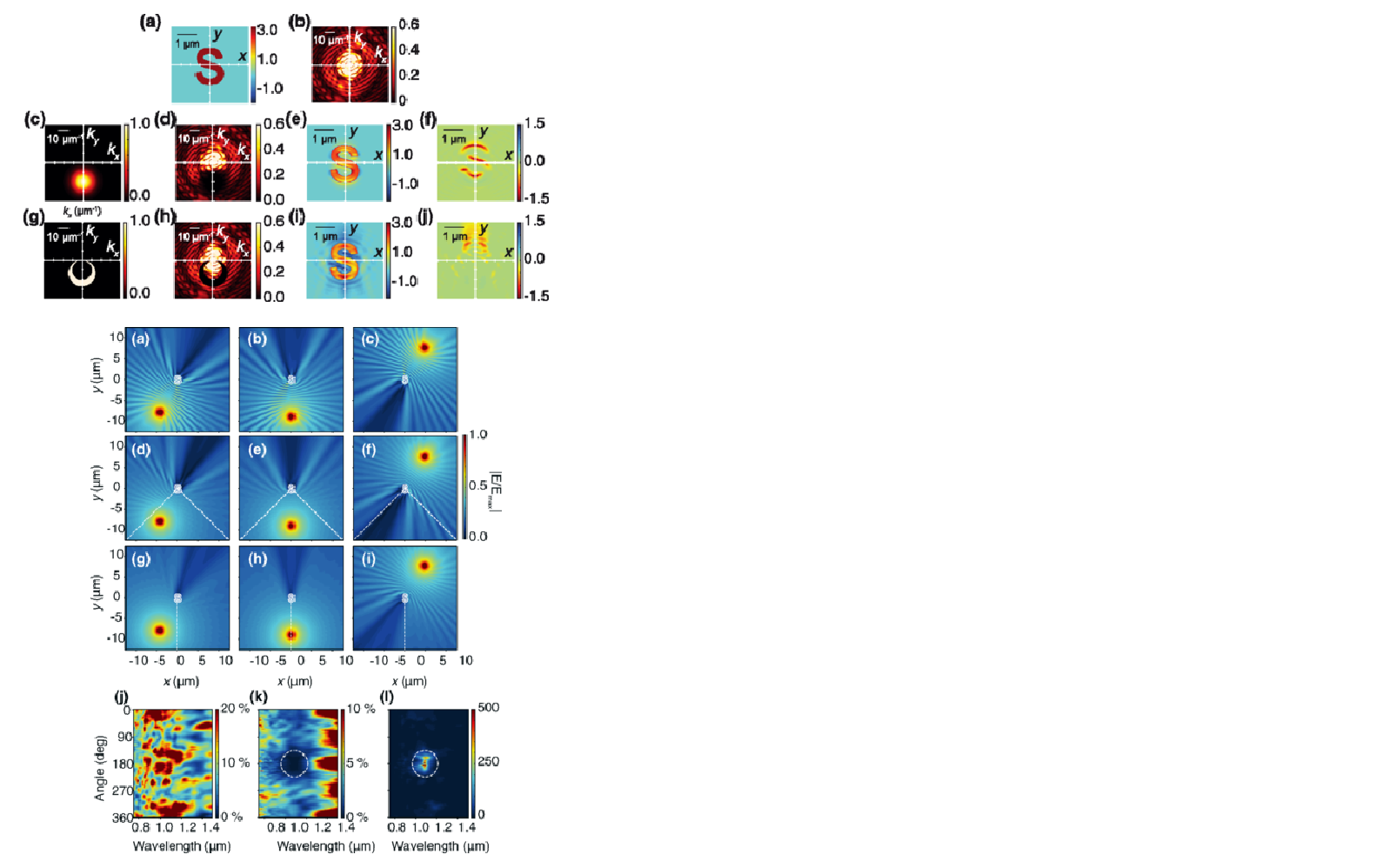 Invisibility on demand based on a generalized Hilbert transform

We propose a feasible invisibility approach to suppress the scattering of waves from or to given directions and for particular frequencies, i.e., invisibility on demand. We derive a generalized Hilbert transform for a specific invisibility arrangement relating the two quadratures of the complex permittivity of an object. The scheme allows either designing objects to be invisible, or alternatively modifying the complex susceptibility of a given object to render invisibility. The theoretical proposal is further confirmed by finite-difference time-domain numerical calculations. Moreover, following an iterative chain of generalized Hilbert transforms, we propose the invisibility on demand with additional constraints, i.e., restricting the required modification of the complex refractive index within practical limits by avoiding gain areas. The proposed concept not only opens a venue of real or complex valued index landscapes, but also bridges the gap between Hermitian and non-Hermitian optical systems by unifying these systems under one single generalized design theory. 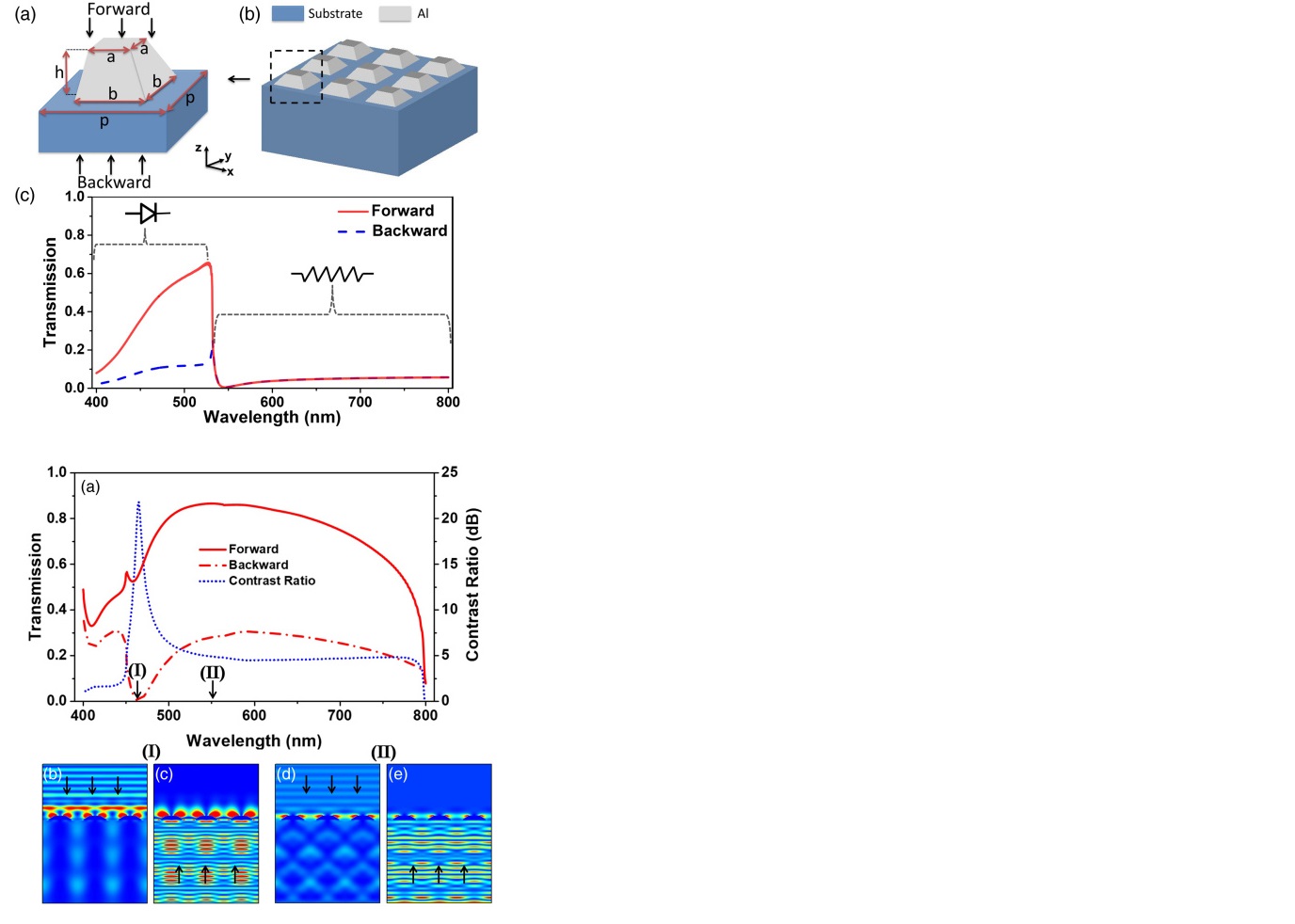 In modern optical applications, it has become an important need to flow light unidirectionally. An optical diode realizes this task as an electrical counterpart manipulates the flow of electrons in semiconductor materials. In this study, we show a broadband and polarization-independent optical diode-like mechanism in a metasurface configuration in the visible spectrum. The approach is passive such that the operating principle does not depend on any type of external biasing scheme. The constituted metasurface composed of a periodic type three-dimensional nanoarray of trapezoidal-shaped aluminum metal on a sapphire substrate is designed to produce the desired optical response for opposite directions of illumination. The optical transmission properties were systematically investigated using finite-difference time-domain computations. The asymmetric transmission frequency interval of the designed metasurface is associated with the Wood–Rayleigh anomaly, and the physical principle lies in the generation of the different number of higher order modes upon oppositely incident light. Our design has forward transmission of greater than 50%, backward transmission of less than 28%, and contrast ratio of greater than 3 dB in the entire visible spectrum. Specifically, a maximum forward transmission of 88% at 550 nm wavelength and a very high contrast ratio (∼23  dB) at a wavelength of 461 nm were obtained. It is numerically shown that the asymmetric transmission has been directly related to the appearance of high-order diffractions for only one direction excitation case. This study provides a path toward the realization of optical diodes for applications, such as optical communications and laser systems. 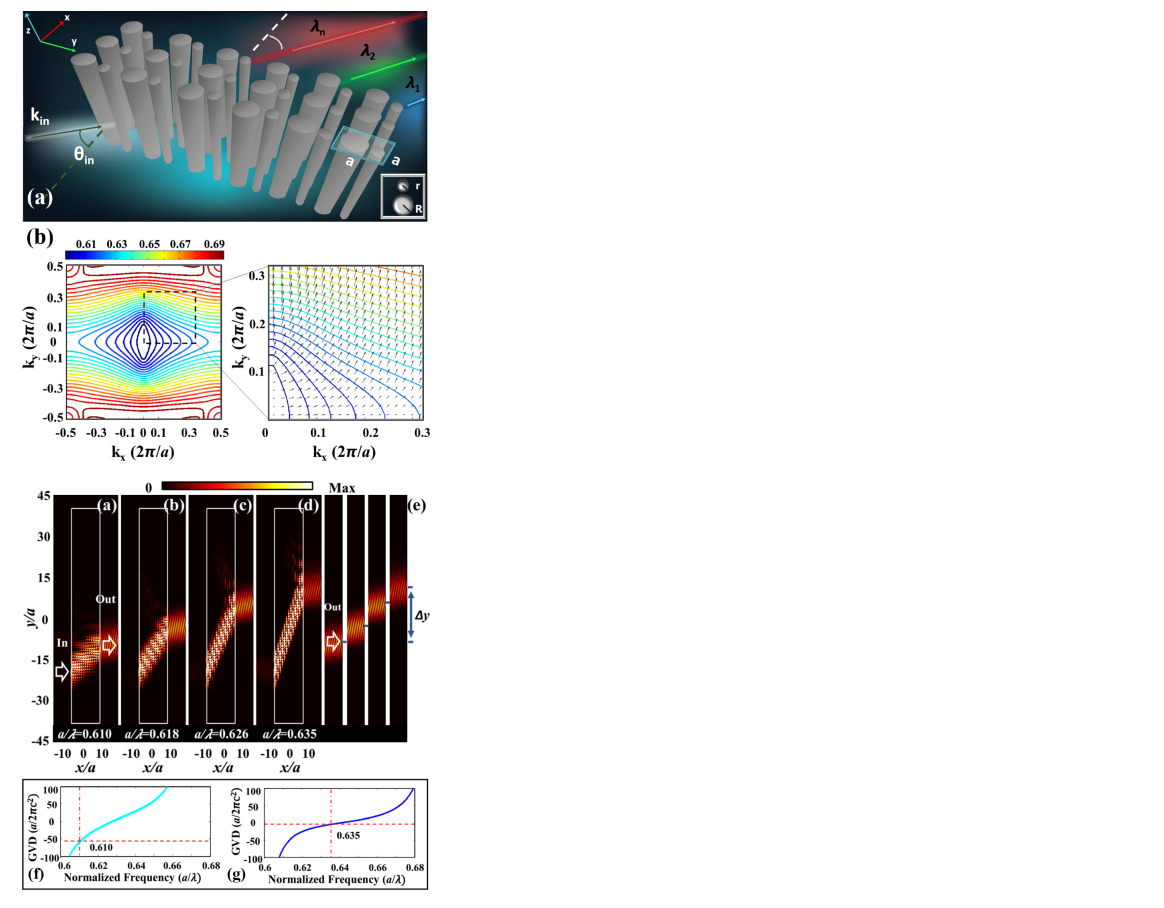 We propose compact S-vector superprism providing broadband wavelength sensitivity within a/λ = 0.610–0.635, where “a” is the lattice constant, λ is the incident wavelength, and S denotes the Poynting vector. The reported configuration overcomes strong beam divergence and complex beam generation due to the self-collimation ability of the low symmetric primitive photonic crystal (PhC) cells. Analytical calculations of equi-frequency contours, photonic band structures, and group velocity dispersions are performed by solving Maxwell's equations and using the plane wave expansion method. Besides, finite-difference time-domain analyses are also conducted. The designed superprism induces large refracted angle variation for different frequencies when the incident angle is fixed: 4% change of incident frequencies results in approximately 40° deflected angle difference with a maximum 68.9° deflection angle inside the PhC. Meanwhile, for a fixed incident wavelength, a large output variation occurs if the incident angle is altered. Microwave experimental results are found to be in good agreement with the numerical analyses. 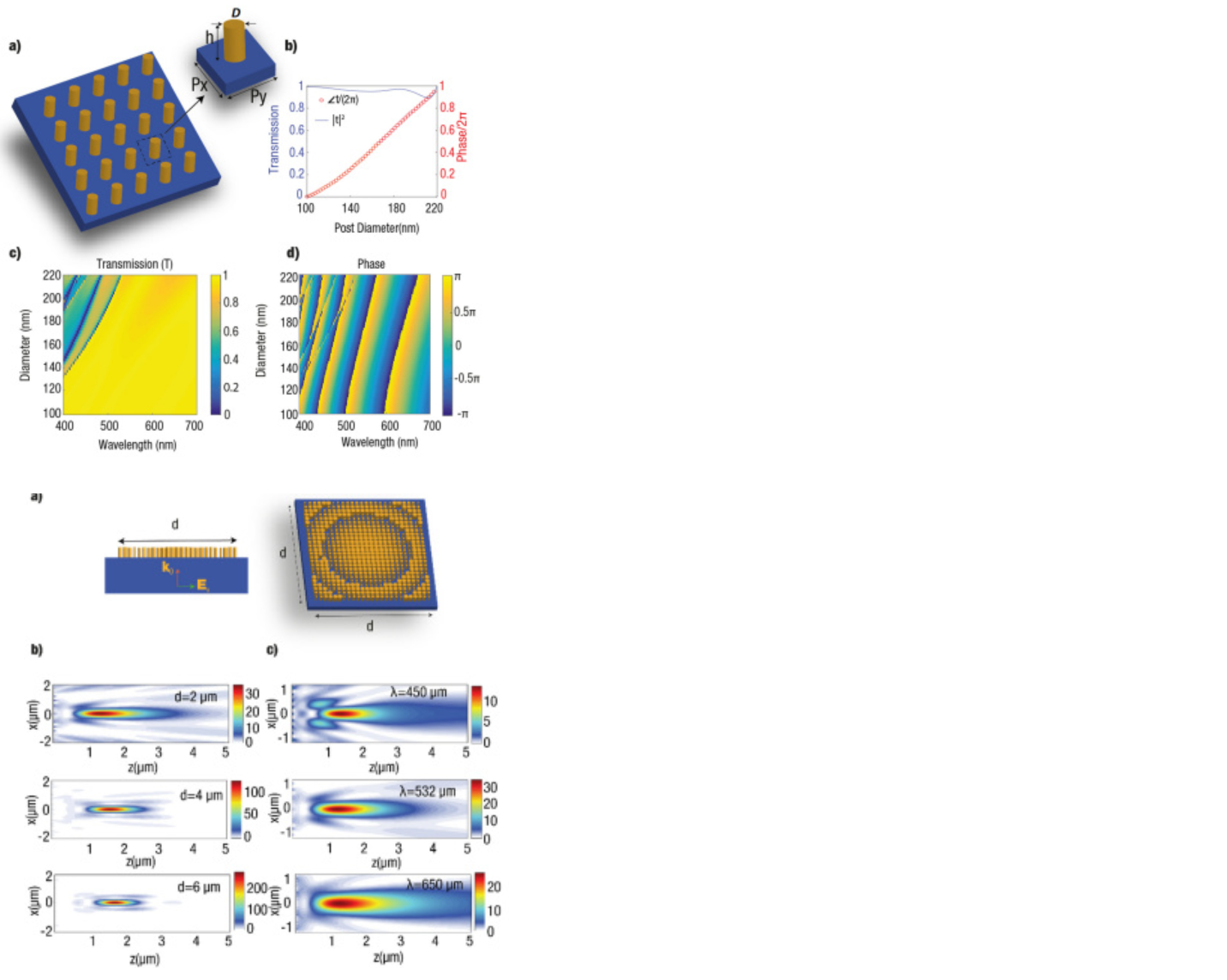 Microlens arrays have been widely used for different optoelectronic applications. The demand for compact optical devices necessitates the deployment of even smaller microlens arrays; however, as the spacing between individual lenses reduces and the lens diameter approaches the length scale of the incident wavelength of light, diffraction starts playing a critical role and produces a significant impact on the final focusing properties of the optical field. In this paper, we analyze the focusing characteristics of all-dielectric ultra-compact metasurface lens arrays for efficient optical device applications, constructed by kinds of broadband planar lenses composed of subwavelength nano-scatterers. By using the 3D finite-difference time-domain (FDTD) method, focusing and diffraction-based crosstalk effects caused by the changing physical spacing between adjacent metalenses, the diameter of microlenses, the operating wavelength, and the array size are rigorously investigated. Analysis of the achieved results show that a larger spacing, a larger lens size, and a shorter wavelength can lead to a weaker focusing crosstalk effect. Moreover, the crosstalk effect does not have a significant dependence on the array’s overall size. This research study may provide an important technological reference to designing an array of all-dielectric planar metasurface lenses with a well-controlled focusing performance and may pave the way further toward the application of metasurface lens arrays in compact optical sensing, coupling, and detecting system designs.

Photonics is the science where information processing including the generation, transmission and detection is carried out by means of photons. Lasers and light emitting diodes are used for the generation of the light, modulators and filters process the data while propagating through dielectric waveguides and fiber optics. The journey ends up with the detection of photons by detectors. Photonics is an interdisciplinary field. The merge of photonics with the electronics is called opto-electronics. Similarly, acousto-optics is the interaction of the photons with the sound waves. Lasers find wide range of applications varying from life sciences to industrial applications. Nanophotonics, biophotonics, quantum optics and metamaterials are some examples of the disciplines dealing with the photonics research. We can see the role of the Photonics in different areas including communication, imaging, lighting, energy, displays, life sciences, and safety. The unique feature of the Photonics is the large capacity of the information processing at high speed.